This talk on Hypercomplex Numbers was held on Friday November 18, 2016 in MC 4020. The talk was given by Fengyang Wang.

There are exactly three distinct two-dimensional unital algebras over the reals, up to isomorphism. Each of these algebras corresponds to a unique geometry, with applications. This talk will develop the concepts needed to understand two-dimensional algebras over the reals, starting from the definitions of key concepts. We will rediscover the familiar complex numbers and generalize its construction to find the other hypercomplex number systems. We will then prove the result that these are the unique hypercomplex number systems, up to isomorphism. Finally, we will discuss possible generalizations to $n$ dimensions. Please ensure that you have a good understanding of fundamental concepts of two-dimensional linear algebra.

The hypercomplex numbers were introduced by Marius Sophus Lie, a Norwegian mathematician. They have applications to geometry, and perhaps more surprisingly, to other fields as well, including calculus.

Our goal in exploring the world of hypercomplex numbers is to:

We will use the references listed below for this talk:

The Definition of the Complex Number Field $\mathbf{C}$

We note that all dilations can be expressed as

We now have a characterization of all linear transformations that either dilate or rotate the two-dimensional plane. The operation of matrix multiplication represents the composition of these linear transformations. Thus we have defined an algebra which allows us to describe all of these kinds of transformations, and the relationship between them. This algebra of dilations and rotations, as some of you might recognize, has a name. It's the algebra of complex numbers. We define

We inherit certain properties of complex numbers directly from the definition:

It turns out that we can recover the other properties of the complex numbers easily from this definition.

Let us now define an involution, called the conjugate:

and note the following familiar results:

inherited from known properties of the transpose. We can also note there is a natural embedding of the real numbers within this complex field; they correspond to exactly the self-conjugate complex numbers; i.e. the symmetric matrices.

Let us define formally an algebra $A$ over a field $\mathbf{R}$ as a vector space $A$ over $\mathbf{R}$ with an additional bilinear binary operation, multiplication $A × A \to A$. The requirement that the operation is bilinear can be restated as:

We also require that the binary operation distributes over regular addition of vectors; if $x∈A$, $y∈A$, and $z∈A$, then

Let us define an associative algebra to be an algebra, with the further requirement that the binary multiplication operation is associative; i.e. if $x∈A$, $y∈A$, and $z∈A$, then $(xy)z$ = $x(yz)$.

Let us define a commutative algebra to be an algebra, with the further requirement that the binary multiplication operation is commutative; i.e. if $x∈A$ and $y∈A$, then $xy = yx$.

Let us further define a unital algebra to be an algebra with a multiplicative identity $1∈A$ such that if $x∈A$, then $1x=x1=x$.

Having defined the complex numbers as a span of two matrices in $\mathbf{R}^{2×2}$, a natural question should be whether it is possible to find similar systems with similar features. But it is not the case that any two matrices can be used for this span. We require an algebra's multiplication operation to be closed. So if $\operatorname{span}(\{A, B\})$ is to generate an algebra, then we require $\{A^2, AB, BA, B^2\} ⊆ \operatorname{span}(\{A, B\})$.

Thus we can find more associative algebras over the reals. For the purposes of this talk, we will further restrict our attention to unital two-dimensional algebras, because having a multiplicative identity is a really good thing.

Furthermore, we want to pick a specific value of $B$ so that $B^2 ∈ \operatorname{span}\{I, B\}$. There aren't that many choices any more! Let's look at a select few interesting choices of $B$.

Earlier, we considered the case where

which generated the field of complex numbers. Let's consider the variation

and we will denote as

Note, however, that the split complex numbers do not form a field, as there are zero divisors (lots of them!). We do retain that 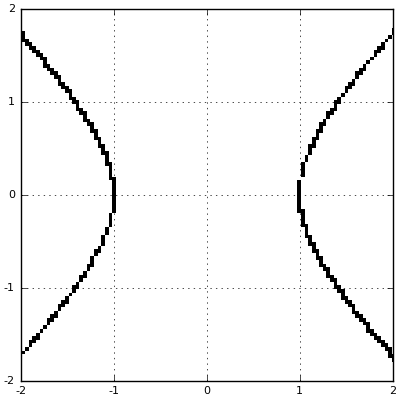 An application of the split complex numbers is for (signed) interval arithmetic. Let $a ± b$ be an interval; it represents all numbers in $[a - b, a + b]$. This can be used to represent some kind of physical measurement. If we add two intervals $a ± b$ and $c ± d$, we get the result that $(a + c) ± (b + d)$. You can verify that this is indeed the smallest possible result.

Simultaneously, we note that with split complex numbers,

Simultaneously, we note that with split complex numbers,

This may seem like needless abstraction, but the use of split-complex numbers allows us to use tools from linear algebra. For instance, note that multiplication and addition alone are sufficient to compute any analytic function. Suppose we wish to find

Let's consider another algebra, this time generated by

and we will denote as

Copying over the definition of the norm for complex numbers, we get the norm for dual numbers. If $z = a + b\mathrm{ɛ} ∈ \mathbf{D}$, then

As with the split complex numbers, there are zero divisors in this algebra; they are exactly the scalar multiples of $\mathrm{ɛ}$. So the dual numbers do not form a field.

The unit circle $\|z\| = 1$ on the dual numbers is a pair of parallel lines. The geometry of dual numbers is quite strange, because no vertical line segments have any length, and the distance between two points is entirely determined by their horizontal distance. This type of geometry is called a parabolic geometry. 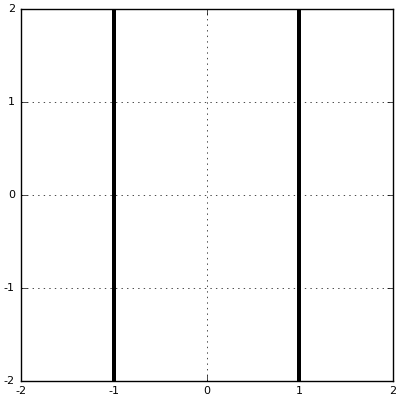 Furthermore, unlike either the complex numbers or the split-complex numbers, the generating element $\mathrm{ɛ}$ of the dual numbers is itself a zero-divisor. Indeed,

Despite these irregularities, the dual numbers are among the most incredible number systems, and are used frequently in computational mathematics. Why? Let $f$ be an analytic function. Then, for any real number $a$, we know that

Define $g(η) = f(a + η)$ which is also analytic, and hence can be extended to the matrices. We now have the remarkable identity:

from which we derive the following corollary, which is the specific case when $b = 1$:

This result means that every analytic function can have its derivative evaluated exactly, which is incredibly useful for many tasks of computational mathematics, optimization, and machine learning.

As an example, let's do a quick problem: Find the derivative of $x^x$. This function is analytic on $(1, ∞)$, so we can use dual numbers. We compute

and extracting the $ɛ$ term,

where every step we took is entirely mechanical and could be done by a computer.

Above we looked at three distinct kinds of hypercomplex number systems. But are they the only kinds? The answer is that they are, up to isomorphism.

and by a similar argument as before, $A$ is isomorphic to $\mathbf{C}$.